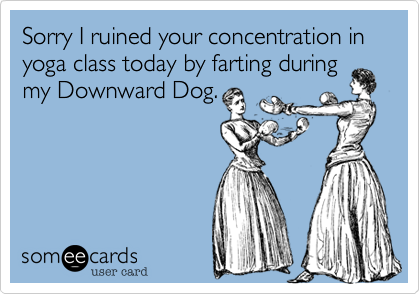 No-one warned me that yoga induces farting. Before you get all excited, no I wasn’t the one who broke wind. In order to fully enjoy this post to its fullest, read the preceding one here.

Anyway….I returned for my second Beginner Yoga Class last Sunday. I arrived 15 minutes early and was not forced to sit in the front row. I opted for the second row. Ghandi scared the shit out of me. She was sitting behind a desk in a dark corner of the room. I didn’t notice her as I unrolled my mat, grabbed by foam brick and gracefully lowered myself to the floor. Just as I settled in, she said “Hey, what was your name?”. It took me a second to locate her. I informed her she scared me, she laughed. Apparently I had not made a lasting impression on her in Class #1. After scoping out the room and noticing how freakishly quiet it was…no one was talking to each other. I was dying to chat with someone. Everyone was stretching. So, I stretched too. As I stretched I noticed the tray of salt was back. None of the intents from last week had been completely absorbed into the salt. Whew. Some dude took the spot to my right. He had a whole system for setting up his yoga space. He unrolled, re-rolled and unrolled his mat a couple of times before placing it on the floor. Then he repositioned it a time or two, moving it about a quarter of an inch each time. He took 2 foam bricks and stacked them on top of each other between his mat and the wall. Once he sat on his mat he moved his bricks closer to his mat. I thought he was finally settled so I turned my attention to the couple who were landing in front of me. Dude to my right popped up on his mat, and stripped off his pants in a single, swift motion. Thank Buddha he had shorts on. Praying to Buddha that he was also wearing compression unders! In case you’re wondering I have incredible peripheral vision. This allows me to stare at intriguing strangers without being noticed. It comes in handy.

Ghandi started our class by apologizing for last week. Apparently she was all hopped up on cold & sinus medication and she hoped she taught us the poses correctly. Like we would know….. BEGINNER YOGA! Remember last week how I told you the room was packed? Not a single space open? This class was a different story. We were easily down 6 Yogi’s. Maybe Ghandi’s pit hair was too much for them?  Ghandi taught us how to meditate. Meditating is not easy. How does one let their mind go blank while remembering to do the special yoga breathing? Since my lower body instantly rejected lotus pose, I sat criss cross applesauce. I decided to tease my chakra by having one palm face up and one palm face down. Half receiving energy, half closed off. I quickly switched to all receiving because it was more comfy. And my criss cross applesauce was starting to hurt so I stretched out my legs. I glanced around and everyone had their eyes closed, so I added that too. My mind was still very busy. Ghandi told us to give all the crazy monkeys in our brain a job. Crazy monkeys? Loved it! Pretty much described my thoughts perfectly. I told my monkeys to just breathe. Of course I spent a minute picturing little monkeys in my head! I will definitely need to revisit this meditation gig.

As promised Ghandi taught us Warrior 1 and 2 and as a gift threw in Reverse Warrior. Being a Warrior was fun. I was secretly hoping there was a Warrior Princess pose, because I would have rocked it.

Ghandi was so pleased with our progress that she took us through several vinyasas. Vinyasas are the flows…the way the moves/poses run together 😉 Are you ready? I thought I was. Here is what our ‘flow’ consisted of: Chair Pose-Standing Forward Fold-Half Forward Bend/Half Lift-Plank-Cobra-Downward Facing Dog-Crescecnt Lunge, via lifting your leg high and swinging it under you with your foot landing between your hands which are firmly planted on the mat. My foot rebelled and landed more under my belly. G suggested I use my hand to get my foot in place. Ugh. Next was Warrior 2-Reverse Vinyasa (which is back to Downward Facing Dog, then into Cobra, back to Plank. Here is when Ghandi got bat-shit crazy….she told us that from Plank we could just hop our feet back to our hands (which were on the mat) I had to laugh. Hop my feet up to my hands which were pressed onto my mat?? Hell no. One day maybe, but not today. I ‘walked’ my feet into my hands and finished out my Reverse with Half Forward Bend/Half Lift to Standing Forward Fold and finally back to Mountain Pose. Oh, did I mention that we did this like THREE times in a row? My special yoga breath was replaced with “oh my God, I’m going to die” breaths. Sweat was rolling down my back and my palms were getting slippery on my mat. Yoga IS a workout. Definitely not an hour of stretching on a padded mat in a dark room while pretty music plays in the background. I liked it.

G said we looked good, but a little practice on our own this week would be awesome. Cooling consisted of some Easy Seated Twists, Seated Forward Folds…aka…touching your toes while seated without bending your knees. Funny. She threw in a Happy Baby (still not my favorite), a Supine Twist to both sides and the good old Savasana, the corpse pose. YAY! Let me go back to that Supine Twist I just mentioned. Here’s a pic of what it looks like: 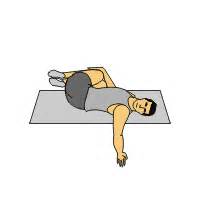 Very satisfying stretch. And unfortunately too satisfying and relaxing for the Dude who took up residency to my right, remember him? We ‘supined’ to our left and then to our right. From here we went into fetal pose. I’ll let Homer show you what it looks like: 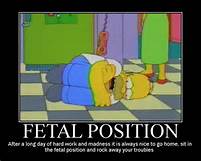 So, we are facing to the right, which means from my fetal position I can see Dude’s backside. G tells us to rock a bit and just enjoy the stretch. I’m in yoga bliss when Dude farts. It wasn’t a loud, dramatic one. It was an airy one, but with force. You know what I’m talking about. Loud enough for me to hear and for Dude to know with certainty that I heard it, but quiet enough that no one else was privy to it’s existence. For the love of Buddha! I quickly rolled out of Fetal Position and up to my feet. I kept looking his direction as we rolled our mats and gathered our belongings. I was ready to give him my “REALLY?” face. He didn’t look my way. I’d like to say it was because he was mortified and scared of me. Dude was just too busy going back through his detailed routine of packing up and putting his pants on.

Next class I will arrive 20 minutes early and position myself between two nice ladies who wouldn’t dare toot in yoga class. Namaste my ass.